“As a thoracic surgeon, I treasure this community, and so receiving the Bakken Award is very special and a great honor,” said Dr. Bartlett. “But of course, there are thousands of people who have contributed to and been involved in our research activities over the years, so I accept the award on behalf of them as well.” 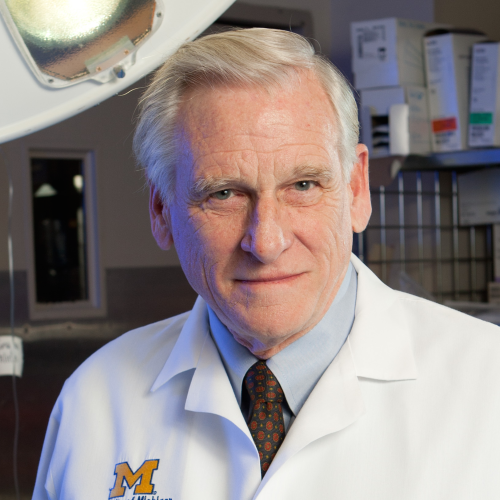 A pioneer in the field of critical care, Dr. Bartlett is best known for developing the lifesaving heart-lung technology known as extracorporeal membrane oxygenation (ECMO). ECMO provides prolonged cardiac and respiratory support by removing blood from the body of the person experiencing heart or lung failure, artificially removing carbon dioxide, and oxygenating red blood cells before returning the blood to the patient.

“Dr. Bartlett helped refine and then define a technology with thoughtful, dogged determination and believed it would work,” said 2017-2018 STS President Richard L. Prager, MD. “As a result, ECMO has become the dominant short-term life support mechanical technology worldwide. Emergency room doctors use it; cardiologists use it; general surgeons use it; cardiac and thoracic surgeons use it. Because of Dr. Bartlett, many, many lives have been saved.”

In 1975 at the University of California, Irvine, Dr. Bartlett successfully treated the first infant patient utilizing ECMO. Five years later, the neonatal ECMO project moved with Dr. Bartlett to the University of Michigan. He continued to develop the technology, and the use of ECMO gradually increased from a few cases each year to several cases each month. When Dr. Bartlett and his team first started using ECMO, the mortality rate for infants with lung failure was 90%; eventually, the survival rate became 90%. Initially used for babies in critical condition, ECMO is now being used more for adults. According to Dr. Bartlett, approximately 100,000 patients have been on ECMO over the past several decades.

“The concept of using mechanical devices to keep people with no heart or lung function alive is new in the last 50 years,” explained Dr. Bartlett. “Most people thought it was crazy because it was very risky, invasive, and had never been done before. There was a lot of skepticism in the general medical community for a long time. No one believed you could do that, and now we do it routinely.”

In addition to ECMO, Dr. Bartlett has made major contributions to critical care physiology, acute kidney injury and continuous hemofiltration, and nutrition in critical illness.

Dr. Bartlett earned his bachelor’s degree in 1960 from Albion College in Michigan. Three years later, he graduated with honors from the University of Michigan Medical School. Dr. Bartlett then moved to Boston, where he joined the Peter Bent Brigham and Children’s Hospital (now Brigham and Women's Hospital). While at Brigham, he served as Senior Resident in Surgery, Chief Resident in Thoracic Surgery, and Chief Resident Surgeon. Dr. Bartlett also was a Research Fellow in Surgery, named the Arthur Tracy Cabot Teaching Fellow in Surgery, and became a Harvey Cushing Fellow. In addition, he was a National Institutes of Health Trainee in Academic Surgery at Harvard Medical School.

In 1970, Dr. Bartlett joined the University of California, Irvine, with roles as Assistant Director of Surgical Services, Director of the Burn Center, and Professor of Surgery. He eventually returned to the University of Michigan Medical Center, where he became the Director of the Surgical Intensive Care Unit, Director of Graduate Education, and Chief of the Trauma/Critical Care Division. As Professor of Surgery in the Sections of General Surgery and Thoracic Surgery, Dr. Bartlett developed a Surgical Critical Care Fellowship and an Extracorporeal Life Support Program. He currently is Professor Emeritus of Surgery.

Under his guidance, the University of Michigan Cardiopulmonary Physiology and Extracorporeal Circulation Research Laboratory is studying blood clotting in extracorporeal circulation, liquid ventilation, implantable lung devices, pulmonary fibrosis in acute lung injury, and many more techniques for prolonged extracorporeal circulation. Dr. Bartlett’s team also is developing an artificial liver system for use in patients who are waiting for liver transplants.

“The most rewarding aspect of my career has been all of the people who I’ve had the opportunity to train and influence,” said Dr. Bartlett. “The thousands of doctors and researchers who have been through my lab or my ICU at one time or another are now doing good work out there and pushing the field forward.”

Dr. Bartlett has held leadership roles in many professional societies, including president of both the American Society for Artificial Internal Organs and the International Society for Artificial Organs. He has served on the editorial boards of 10 major medical journals and written more than 300 articles in peer-reviewed publications. Dr. Bartlett also published two novels—The Salem Syndrome: A Novel of Medicine and Law in 2005 and Piece of Mind: A Novel of Medicine and Philosophy in 2007.

An amateur musician, Dr. Bartlett plays the bass violin in the Life Sciences Orchestra at the University of Michigan. In addition, he is an avid hockey fan and a recreational sailor.

Founded in 1964, The Society of Thoracic Surgeons is a not-for-profit organization representing more than 7,100 cardiothoracic surgeons, researchers, and allied health care professionals worldwide who are dedicated to ensuring the best possible outcomes for surgeries of the heart, lung, and esophagus, as well as other surgical procedures within the chest. The Society’s mission is to enhance the ability of cardiothoracic surgeons to provide the highest quality patient care through education, research, and advocacy.