WASHINGTON, DC (May 21, 2021) — US Senator John Boozman (R-AR) was named Legislator of the Year by The Society of Thoracic Surgeons during a virtual ceremony on Thursday for his outstanding legislative contributions that impact cardiothoracic surgeons and their patients.

“We are living through some of the most challenging times many of us have ever experienced. The health care industry was tested in ways we never dreamed of, and it showed the resilience of physicians, medical providers, and their staff,” said Sen. Boozman. “To be recognized by The Society of Thoracic Surgeons at a time like this is something I will always be grateful for and will also serve as an inspiring reminder of the importance of supporting our health care professionals.” 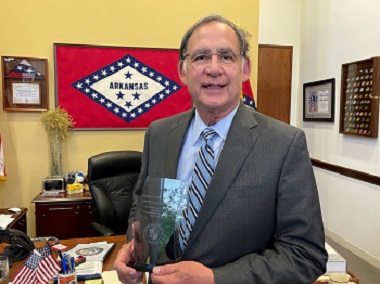 An optometrist by training, Sen. Boozman is committed to sharing his experience with colleagues on both sides of the aisle and finding “commonsense” solutions to challenges in the health care system. First elected to the US Senate in 2010 and currently in his second term, he consistently has been a champion of reforms that lower costs, improve quality, and increase affordable access to patient care. Most recently, Sen. Boozman led bipartisan efforts to halt damaging Medicare reimbursement cuts for cardiothoracic surgery.

“We need an environment that encourages physicians to continue practicing, so we must avoid these cuts, especially during the COVID-19 pandemic,” said Sen. Boozman. “Health care providers shouldn’t have to worry about their bottom line when they are on the front lines treating patients with COVID-19 and administering life-saving vaccines.”

Sen. Boozman has supported other STS priorities such as emergency assistance for rural providers during COVID-19 and confronting the youth e-cigarette epidemic. In addition, he has addressed the predicted shortage of future primary care and specialty physicians by introducing legislation that gradually will lift caps on and increase the number of Medicare-supported residency training slots. Sen. Boozman also voted in favor of the 21st Century Cures Act (signed into law in 2016), which bettered cancer screening, expanded addiction prevention efforts, helped lower health care costs for Americans, and brought scientists closer to discovering cures for serious medical conditions.

"Senator John Boozman possesses a profound firsthand knowledge of health care issues and has distinguished himself over his political career by promoting reforms that lower costs, improve quality, and maintain affordable access to patient care,” said Alan M. Speir, MD, chair of the STS Council on Health Policy and Relationships. “He has tirelessly supported our STS advocacy priorities such as his sponsorship of a bipartisan bill to block Medicare payment cuts for surgeons which would have adversely impacted access to care for Medicare patients and resulted in a disastrous effect upon the solvency of many cardiothoracic practices. We are privileged to present to him this much deserved award."

The STS Legislator of the Year Award acknowledges a member of Congress who has made sustained and/or extraordinary efforts in promoting issues of importance to cardiothoracic surgeons and their patients through legislation, funding, or other outreach to policymakers.

Founded in 1964, The Society of Thoracic Surgeons is a not-for-profit organization representing more than 7,700 cardiothoracic surgeons, researchers, and allied health care professionals worldwide who are dedicated to ensuring the best possible outcomes for surgeries of the heart, lung, and esophagus, as well as other surgical procedures within the chest. The Society’s mission is to advance cardiothoracic surgeons’ delivery of the highest quality patient care through collaboration, education, research, and advocacy.