STS also signed a Campaign for Tobacco-Free Kids letter to the Food and Drug Administration (FDA) applauding the agency’s proposed rule that would require cigarette packages and advertisements to carry prominent, graphic warnings on the negative health effects of smoking. The FDA is court-ordered to release a final rule by March 15, 2020.

STS Suggests Changes to Managing Surprise Billing
The Society joined the American Medical Association and more than 100 other medical organizations in sending a letter to the House and Senate outlining concerns with the current legislative approaches to addressing surprise medical bills. The letter makes recommendations for how to maintain marketplace balance while protecting patients from gaps in health insurance coverage, including creating an independent dispute resolution process.

Medical Organizations Comment on Device Sterilization Processes
STS, the American College of Cardiology, the American Society for Gastrointestinal Endoscopy, the Heart Rhythm Society, the Society for Cardiovascular Angiography and Interventions, and the Society of Interventional Radiology sent a letter to the FDA regarding the use of ethylene oxide for sterilizing medical devices such as pacemakers, leads, catheters, and stents. Concerns about the gas’s negative effects on worker health and the environment have led to the shutdown of some sterilization facilities that use ethylene oxide. The letter notes that alternative sterilization processes for these devices are limited or suboptimal and urges caution in restricting the use of ethylene oxide before other procedures can be established. The FDA’s Medical Devices Advisory Committee will discuss this matter in early November.

Report a Heparin Shortage
In response to a letter from STS, the FDA has provided details on its efforts to maintain an adequate supply of heparin in the US amid an outbreak of African swine fever in China. The FDA stated that while manufacturers are reporting an increased demand for heparin, at this time the US supply has not negatively been affected. However, if you or your colleagues are experiencing a shortage of heparin, you are asked to report it at drugshortages@fda.hhs.gov or 240-402-8380. In addition, if you notice reduced efficacy or any adverse events in cases where heparin is used, contact the FDA via its MedWatch Voluntary Reporting page. The STS Government Relations team continues to monitor the situation and welcomes your comments. 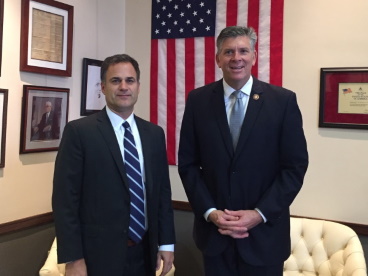 Key Contact Connect: Swain Advocates for Data Access
On October 10, STS member Timothy W. Swain III, MD, from OSF HealthCare in Peoria, Illinois, met with Rep. Darin LaHood (R-IL) at the Congressman’s district office. They discussed how providing Qualified Clinical Data Registries such as the STS National Database with access to Medicare claims data could help the specialty improve patient outcomes and determine quality in health care. Access to Medicare claims data is one of the Society’s 2019 Advocacy Priorities. If you would like to set up meetings with your legislators, contact Madeleine Stirling.