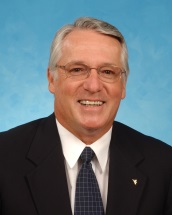 A “great friend” to the cardiothoracic surgery community passed away on May 21 at the age of 79.

Gordon F. Murray, MD became the Society’s 44th President after having served for 5 years as STS Secretary during a time when the Society underwent significant changes, including its transition to a self-managed organization. Dr. Murray also was President of the Southern Thoracic Surgical Association from 1992 to 1993 and the Thoracic Surgery Directors Association from 1993 to 1994.

Born in Michigan, Dr. Murray earned his medical degree from the University of Michigan. He completed surgical residencies at The Johns Hopkins Hospital and Massachusetts General Hospital. Following service in the United States Navy, he joined the faculty of the University of North Carolina, Chapel Hill, and eventually moved to West Virginia University, where he served as Chairman of the Department of Surgery, Chief of Cardiothoracic Surgery, Director of the Thoracic Residency Program, and Chief of Surgical Services.

“Gordon served our specialty in so many ways—always with grace, dignity, and a smile,” said Douglas J. Mathisen, MD, STS Historian, who was the Society’s First Vice President when Dr. Murray was President. “He was the consummate Midwesterner—both feet firmly planted on the ground, overflowing with common sense, a strong sense of right and wrong, and always treated people respectfully—qualities that are not necessarily in overabundance these days. His friendship and good nature will be missed by all who knew him.”

STS Past President Mark B. Orringer, MD was friends with Dr. Murray for 50 years, dating back to their days as residents at Johns Hopkins.

“Throughout his lifetime of professional accomplishments, service to our specialty, and leadership positions, Gordon was characterized as a truly ‘good guy’—kind, respectful of others, and sensitive, with an engaging smile and great sense of humor,” Dr. Orringer said. “He was a tremendous advocate for resident education and curriculum development. Few others have demonstrated such consistent dedication to thoracic surgery. He was a wonderful and dear friend.”

In his 2010 Presidential Address, Dr. Murray described the transformation occurring in cardiothoracic surgery training and emphasized the need to allow ample time for developing the maturity of reflection and judgment on which quality patient care rests.

“All of the concepts of quality patient care I have emphasized this morning: comprehensive, compassionate, continuity, communication, coordination, [and] competency depend on the thoughtful acquisition and application of such judgment,” he said. “Good judgment is critical to the fundamental success of our unrivaled profession’s clinical and educational missions.”