“This is a great honor,” said Dr. Bove, from C.S. Mott Children’s Hospital in Ann Arbor, Michigan. “I am overwhelmed, particularly when I see the previous recipients of this award—an incredibly accomplished group of people to say the least! It is humbling to be included among these pioneers in cardiothoracic surgery.”

An innovator and influencer in the field of pediatric congenital heart surgery, Dr. Bove is best known for advancing staged surgical repair of complex single ventricle heart disease, particularly hypoplastic left heart syndrome (HLHS)—a rare congenital heart defect in which the left side of the heart is underdeveloped. 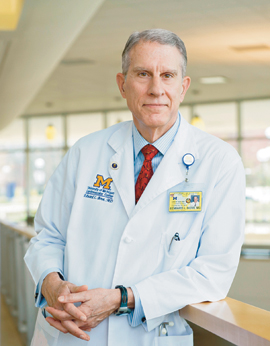 This birth defect had always been fatal, and Dr. Bove’s performance and refinement of the high-risk Norwood procedure initially was considered controversial and a wonder of the medical world. Now, the operation is used widely and a majority of HLHS patients who undergo a series of surgical procedures, including the Norwood, can survive into adulthood.

Dr. Bove and his team have performed more than 1,500 Norwood procedures at C.S. Mott Children’s Hospital, with many of their patients traveling to Michigan from other states and countries around the world.

“Dr. Bove is the supreme combination of master surgeon and master educator,” said 2020-2021 STS President Joseph A. Dearani, MD. “With exceptional intellect, judgment, and technical ability, he perfected the Norwood operation and set the standard for the rest of us. His leadership and contributions to cardiothoracic surgery are countless.”

From as far back as he can remember, Dr. Bove said he always had an intense interest not only in medicine, but also in engineering, inspired by his father who was a mechanical engineer.

After completing his undergraduate work at the College of the Holy Cross in Worcester, Massachusetts, he earned his medical degree from Albany Medical College in New York. It was in Albany where Dr. Bove experienced his first clinical rotation in pediatric cardiology and saw a young child with tetralogy of Fallot. The physical exam of the baby fascinated him as he tried to understand how and where the blood was flowing. Soon after, Dr. Bove was assigned to thoracic surgery and able to scrub in when that same child underwent a complete repair of the heart defect.

“From that point on I was convinced that that was what I wanted to do,” said Dr. Bove. “Pediatric heart surgery was the perfect combination of medicine, engineering, and physiology. It’s been an incredible ride ever since!”

In his career so far, Dr. Bove—who has been called a “brilliant surgeon” with phenomenal technical skills—estimates that he has performed more than 12,000 surgeries.

Dr. Bove completed his surgical residencies at the University of Michigan Hospitals and then joined the Hospital for Sick Children in London, England, as a senior registrar (the equivalent of a fellow) for additional training in complex congenital heart surgery. In 1985, he returned to the University of Michigan as an associate professor of surgery and pediatrics and became director of the Division of Pediatric Cardiovascular Surgery.

Known for his prowess in program development and his commitment to training young surgeons, Dr. Bove elevated cardiac surgery at the University of Michigan from a division to a department. He was appointed as the inaugural chair of the Department of Cardiac Surgery. In addition, Dr. Bove launched robust programs focusing on stem cell and outcomes research, and established an integrated 6-year cardiothoracic surgery residency program. He currently is professor of cardiac surgery at Michigan Medicine.

Recognized for guiding cardiac teams with exceptional poise, confidence, and vision, Dr. Bove also has served as a consultant for and worked collaboratively with numerous institutions, including Crouse-Irving Memorial Hospital in Syracuse, New York, the Veterans Administration Hospital in Ann Arbor, Michigan, the Joe DiMaggio Children's Hospital in Hollywood, Florida, and the Edith Wolfson Medical Center in Holon, Israel.

“While it’s very hard to choose one ‘proudest moment,’ I suppose it’s a combination of all the times that I have received college graduation or wedding invitations from patients whom I operated on as newborns, many with HLHS, as well as other forms of serious congenital heart defects. I truly enjoy hearing from grown patients who thank me for giving them a chance at life,” said Dr. Bove.

With growing synergies between pediatric cardiology and surgery, many forms of congenital heart disease that previously were untreatable now are being managed with incredible success. Dr. Bove said he is excited by what’s in store for the future of congenital heart surgery. “Babies born with HLHS and other complex types of single ventricle disease are living into their 30s and 40s. There will be additional issues for our specialty to manage, but developments in areas such as mechanical support devices, stem cell therapy, and other discoveries hold tremendous promise,” he said.

In addition to his clinical career, Dr. Bove has served on several councils, committees, and editorial boards and has authored more than 300 articles and dozens of book chapters, as well as edited two books.

Founded in 1964, The Society of Thoracic Surgeons is a not-for-profit organization representing more than 7,500 cardiothoracic surgeons, researchers, and allied health care professionals worldwide who are dedicated to ensuring the best possible outcomes for surgeries of the heart, lung, and esophagus, as well as other surgical procedures within the chest. The Society’s mission is to advance cardiothoracic surgeons’ delivery of the highest quality patient care through collaboration, education, research, and advocacy.