March 19, 2020 — As the coronavirus (COVID-19) continues its spread across the world, the medical community is closely monitoring events, regularly updating policies and protocols, and enacting preparedness plans in response to the ever-changing information and in collaboration with local health agencies.

The effects on physicians and other health care professionals, as well as hospitals and health systems, are deep and broad—from rescheduled elective surgeries and routine appointments to an influx of patients to limited availability of certain medical supplies and drugs. Cardiothoracic surgeons are among those who are navigating the growing impact of COVID-19 and embracing the changes, which are happening by the minute. Live updates and coverage of COVID-19 have been flooding televisions, social media feeds, and news sites for weeks now, keeping the public updated on the latest news.

Dr. Alan D. L. Sihoe offers an international perspective on COVID-19 and shares his personal experience and thoughts on how the coronavirus pandemic has affected Hong Kong and what it means for the rest of the world. 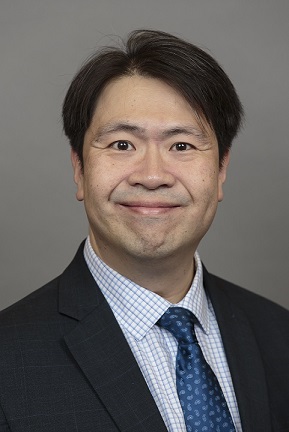 Hong Kong is a Special Administrative Region of China and shares a border with mainland China. An estimated 300,000 people cross this border in both directions every day. Given that the coronavirus (COVID-19) outbreak started in December 2019 in mainland China, it therefore seems extraordinary that Hong Kong has only had a relatively small number of cases. As of March 17, 2020, Hong Kong—with a population of 7.5 million—had 157 confirmed cases of COVID-19. Of these, four people have died and 88 have already recovered and been discharged. Throughout the outbreak, Hong Kong has not experienced the exponential increase in numbers of new cases seen in mainland China, South Korea, Italy, and other countries. The number of new cases daily in Hong Kong has essentially not exceeded single digits. How is this possible?

The key to understanding this comes from 2003, when Hong Kong was at the epicenter of another horrific outbreak: Severe Acute Respiratory Syndrome (SARS)—a viral respiratory illness caused by a coronavirus called SARS-associated coronavirus. No other city on earth had as many cases. Of the 774 global deaths due to SARS, 299 occurred in Hong Kong, including nine health care workers. The trauma of that experience became forever etched in the shared memories of the Hong Kong people and led to many adaptations to daily life that may seem quirky to outsiders: temperature checking was routine for anyone entering Hong Kong by any route; hand sanitizer dispensers became ubiquitous in many public places; elevator push buttons were sanitized every hour or two; and so on. The collective wariness of a possible future outbreak ensured both the official and public responses to COVID-19 were quick and thorough.

The Official Response
The news of a possible viral respiratory disease outbreak in Wuhan first reached Hong Kong around late December 2019. Some key features of the official Hong Kong government response are summarized in Table 1. Even before the first confirmed case appeared in Hong Kong, steps were already being implemented to get the health care system alerted and prepared. Within just days of the first case confirmed in Hong Kong, an emergency response level was declared, quarantine stations were established, schools and public facilities were closed, and official celebrations for the Chinese New Year (the largest social event of the year) were canceled. These measures were all announced even before the number of confirmed cases reached double digits. Testing of suspected cases also was taken very seriously. Of the 2,726 suspected COVID-19 cases reported up to March 17, 2,395 already have been ruled out from having the infection. 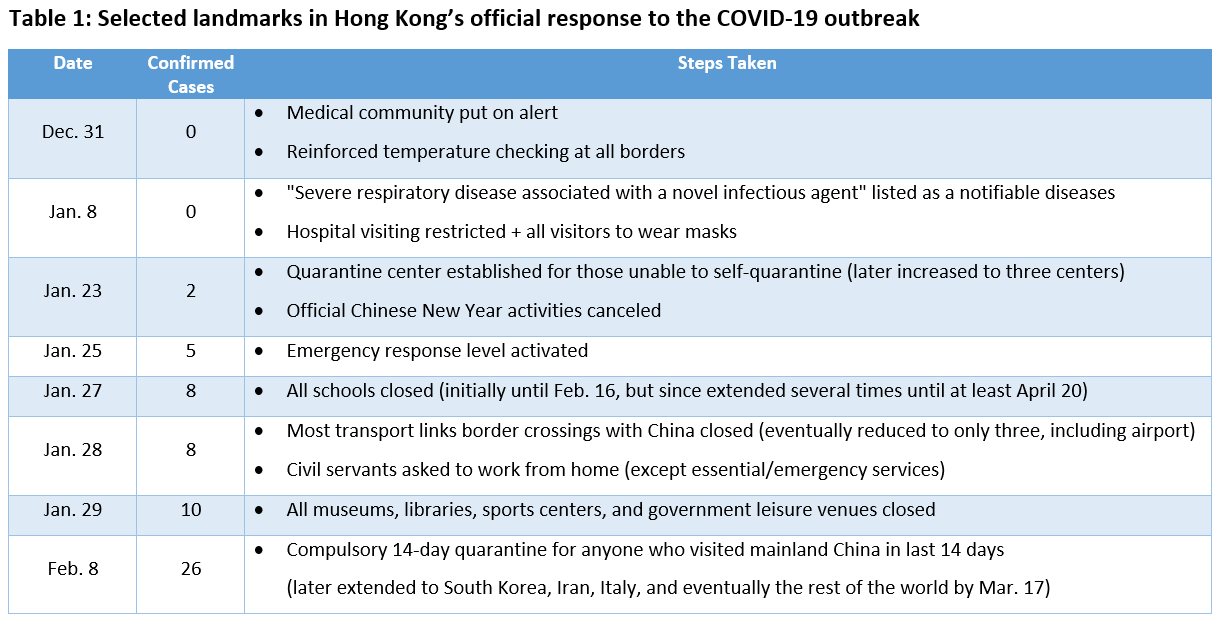 In the health care sector, visiting at public hospitals was significantly limited and all visitors were requested to wear surgical masks starting on January 4. As the emergency response level kicked in on January 25, all visiting was stopped and non-emergency services at public hospitals were to be reviewed or suspended. Supplies of personal protective equipment were centralized and distributed to staff to ensure adequacy of supply to the front line. The private health care system in Hong Kong is a large one. In parallel with public hospitals, private hospitals had implemented very strict measures during late January, including:

These procedures ensured that the private sector could continue providing near-normal elective services in as safe of an environment as possible for patients who required care, while the public hospitals could focus on preparations for any surge in COVID-19 cases.

The number of new cases daily in Hong Kong has essentially not exceeded single digits. How is this possible?

The Public Response
The public’s confidence in the government has, for other reasons, diminished in recent years. Even though Hong Kong began closing all but three of its border crossings with mainland China on January 28, when Hong Kong had only eight cases, there was some vocal criticism from the public that this was not fast or thorough enough. This suspicion of government has seen the emergence of a very distinct movement in Hong Kong: that of ordinary citizens acting to protect themselves and their communities instead of just relying on the “authorities.”

Since as early as January, some of the more obvious measures that most ordinary folks in Hong Kong have taken – rightly or wrongly – include:

Some of the negative impacts of the COVID-19 crisis on daily life in Hong Kong have been the massive blow to many local businesses (ranging from tourism to school buses) and the infamous spree of panic buying during late January to mid-February that resulted in not only supplies of masks and hand sanitizer being depleted, but also toilet paper, rice, and pasta.

However, the never-say-die spirit of Hong Kong shone through in many ways. Many badly hit restaurants offered visible measures to reduce cross-infection risks, such as temperature checks, offering paper envelopes to diners in which to store masks when eating, keeping greater separation between tables, and even erecting Perspex (Plexiglas) barriers between guests. During the worst period of panic buying, ordinary people mobilized to donate masks and distribute them to those in greater need. Many doctors and nurses in the private sector volunteered their time to serve in public hospitals or provide public education.

The public response may have begun with an over-reaction driven by the instinct for self-preservation, but the end result of near-universal mask wearing and social distancing was an effective limitation of local spread thus far. Of the last 57 confirmed cases in Hong Kong, 50 were imported rather than from local spread.

A Coming Threat?
Hong Kong may become a victim of its own apparent success in limiting the outbreak thus far. As word quickly spreads that Hong Kong is "safer" than most countries around the world, tens of thousands of its citizens working or studying abroad are realizing quickly that it may be advantageous to return. At the time of this writing, there has been a sudden surge of Hong Kong people abroad anxiously rushing to fly back, and it is uncertain whether returning citizens will bring a second wave of imported infections.

Within Hong Kong, a certain sense of complacency may be creeping in as supplies of masks, hand sanitizer, and – yes – toilet paper are returning to near-normal. This comes alongside a degree of “cabin fever” after self-isolation since January. There is a risk of self-discipline eroding if Hong Kong congratulates itself prematurely.

Lately, the world seems to have learned from Hong Kong’s official and public responses and has started to implement measures to limit cross-border and local spread. If Hong Kong is further ahead than most other regions on the COVID-19 curve, the rest of the world would do well to watch closely how Hong Kong copes with the new challenges in the coming days and weeks.

Read the US perspective from Dr. T. Sloane Guy.