STS recently presented Sen. Lamar Alexander (R-Tenn.) with its Legislator of the Year Award, celebrating his firm commitment to issues impacting cardiothoracic surgeons and their patients. 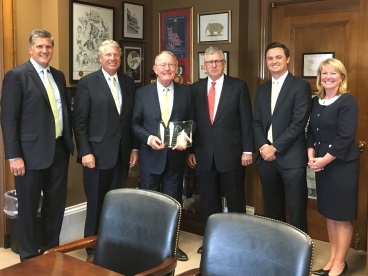 In 2017, Sen. Alexander worked across the aisle to advance policies supported by physicians. As Chairman of the Senate Committee on Health, Education, Labor, and Pensions, he collaborated with Sen. Patty Murray (D-Wash.) on a focused plan to stabilize the Affordable Care Act’s insurance marketplaces. Sen. Alexander also helped spearhead the 21st Century Cures Act, which contained provisions to fund the National Institutes of Health, reduce opioid abuse, and advance medical research and development. It also included an STS-drafted definition about clinical registries.

Below, Sen. Alexander answers questions regarding the future of health reform and how cardiothoracic surgeons can help.

As someone who has been at the forefront of the health reform debate, what is this the most important issue in health care today? What other health care issues should be addressed?
For the last 7 years, Republicans and Democrats have been locked in a debate over health insurance, primarily the individual insurance market, which is important, but is where only 6% of insured Americans get their health insurance. The hard truth is that we will never get the cost of health insurance down until we get the cost of health care down. So we have begun a series of hearings looking at how to reduce health care costs, including examining administrative costs, waste, how to improve transparency, looking at more efficient solutions in the private sector, and other important issues as they come up. The United States has the most innovative health care system in the world, but it is also the most complex, and too often, Americans struggle to understand the system and plan for and afford their health care.

What can cardiothoracic surgeons do to help resolve these issues?
The single thing that is most helpful to members of Congress is when we get very specific recommendations from experts in their fields on the issues. In this case, it would be helpful to hear from physicians specifically what they believe should be done to help reduce the cost of health care in our country. These may be things that can be done legislatively or by the administration or that we can shine a spotlight on.

Over the course of your career as a governor, a cabinet secretary, and a US Senator, what were your biggest achievements in health care?
In 2016, the Senate health committee worked in a bipartisan way to produce the 21st Century Cures Act, which Senator Mitch McConnell called the most important legislation of the year. It’s a law that will help virtually every family across America—it will take advantage of the breathtaking advances in biomedical research and bring those innovations to doctors’ offices and patients’ medicine cabinets.

I’m also proud of the work the Senate has done to help address the opioid crisis this year and look forward to our committee’s proposals being taken up and passed later this year.

How have advocates, such as surgeons and patients, influenced your perspective on health care?
Insights from those who know an issue best are invaluable.

In March, you reintroduced an Affordable Care Act stabilization package and urged that it be included in the omnibus spending bill. What effect would this legislation have on health care delivery?
That package was the result of 7 months of bipartisan discussions involving more than half the members of the US Senate. It included: 3 years of cost-sharing reduction subsidy payments (CSRs) to help low-income Americans pay out of pocket expenses; streamlining the Affordable Care Act’s Section 1332 State Innovation Waiver to allow states to increase choices and lower premiums and use federal insurance funds more effectively; and 3 years of reinsurance grants at $10 billion each year, so states could create funds to insure the very sick and lower premiums for everyone. Experts at Oliver Wyman predicted these proposals could reduce rates by up to 40% over 3 years. The Congressional Budget Office said that if scoring reflected that CSRs are being paid through the tax credit, enacting the proposals would actually save taxpayer dollars.

Democrats blocked the legislation from the omnibus because they would not apply to these proposals the traditional Hyde compromise language regarding federal funding for elective abortions—even though Democrats have voted for Hyde language in every appropriations bill since 1976 and voted to apply Hyde to more than 100 other provisions in the same omnibus bill this year. I am talking with the administration about actions they can take to give states more flexibility to help lower health insurance premiums, especially for the 9 million working Americans in the individual market who do not receive a federal subsidy. I also will be encouraging governors and state insurance commissioners to do everything they can to help repair the damage caused by the Affordable Care Act.

What does the STS Legislator of the Year Award mean to you?
I am grateful to the Society for this honor, but the real thanks goes to the thousands of physicians and researchers and health care professionals who work tirelessly each day to save lives.