An Important Shift May Be Happening in CT Surgery

STS News, Spring 2022 — With a current pipeline showing steady gains of female trainees, the cardiothoracic surgery workforce may be on the verge of changing.

The comprehensive analysis—which offered a snapshot of the global cardiothoracic surgery workforce—was presented during the Society’s Annual Meeting in January.

“What is unique about this work is the breadth of our capture,” said study author Barbara C.S. Hamilton, MD, MAS, from the University of California San Francisco (UCSF). “Understanding our global workforce is challenging, and survey data are inherently biased. Our data acquisition was novel, with our research using membership data that did not require any additional input from members. We attempted to obtain a more global and less biased representation of our workforce.”

Dr. Hamilton and colleagues queried the organizations’ membership directories. A total of 12,053 profiles were included in the study. The researchers found that the membership is overwhelmingly male (93%). As far as female members, EACTS has the highest proportion (9%), and ASCVTS has the lowest (3%). STS membership is 6% female. 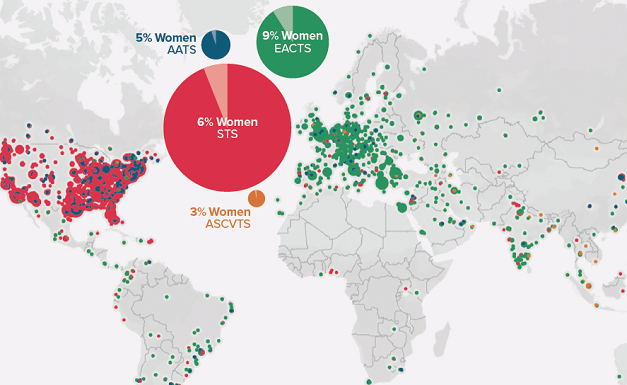 Although the current workforce still is predominantly male, more female representation awaits in the trainee population, according to Dr. Hamilton.

The researchers found that 25% of EACTS trainees were female (trainee data were not available for STS, AATS, or ASCVTS). In addition, data from the Association of American Medical Colleges (AAMC) show that the proportion of female cardiothoracic surgery trainees has grown—from 15% in 2007, to 19% in 2011, and 26% in 2020.

“Thankfully there seems to be a larger proportion of female trainees in cardiothoracic surgery than the proportion of practicing female surgeons, which gives hope that we are beginning to change and progress,” said Dr. Hamilton.

“We have come a long way since the original STS membership survey in 1976, when a question on sex was not even included,” the researchers stated in the study article.

‘Long Way to Go with Diversity’

But more than 60 years after she entered the specialty, men still dominate the world of cardiothoracic surgery. This is despite the fact that women now outnumber men in US medical school enrollment—in 2019, for the first time, the majority of medical students were women (50.5%), according to the AAMC.

“We are in danger of being unable to evolve and grow as a specialty if we do not aggressively support and promote young and female surgeons,” Dr. Hamilton said. “We must work harder to not just attract but also retain, support, and increase the visibility of female and other underrepresented trainees and surgeons for our specialty to find longevity and sustainability.”

Among the four organizations—STS, AATS, EACTS, and ASCVTS—there are 788 female members. Interestingly, within this group, most practice academic medicine (60%), but only 5% are full professors.

“With such a dearth of female representation in the upper echelons of cardiothoracic surgery academia, it can be hard for young and especially female trainees to believe this is a specialty in which they can achieve success,” said Dr. Hamilton.

In addition, Dr. Hamilton explained that cardiothoracic surgery has a “long way to go with diversity, both in terms of age and sex.” Her team’s research showed that the median age within the specialty is 63 years, and 64% of members are in the later stages of their careers.

“We are very unbalanced in terms of who makes up our surgical practice, and we are overwhelmingly male and old,” said Dr. Hamilton. “We work in a fantastic field that medical students, both male and female, find exciting and unique, but we lose many of these candidates, especially women, along the way.”

“We have made small strides in some areas, but plentiful opportunities exist for continued growth and development. It is crucial that we wake up to these issues,” she said.

Coauthor Tom C. Nguyen, MD, from UCSF, added, “This is the first and largest global snapshot of our cardiothoracic surgery workforce. Understanding who we are is incredibly important as we shape the future of where we are going.”