STS News, Summer 2016 -- The world of transcatheter aortic valve replacement (TAVR) is changing rapidly, and cardiothoracic surgeons have the opportunity to “help drive the train”—or get left behind.

TAVR was approved in 2011 for use in patients who are at high risk for conventional surgical aortic valve replacement (SAVR). Recently, trials in intermediate-risk patients have shown that TAVR is equivalent and possibly superior to SAVR. These findings have now opened the door to trials in low-risk patients, who make up about 80% of patients with aortic stenosis, according to an analysis of data in the STS Adult Cardiac Surgery Database and the STS/ACC TVT RegistryTM.

“The results from these low-risk trials likely will change surgical practice forevermore,” said STS Past President Michael J. Mack, MD. “Over the next 10 years, I think we’re going to see an 80% shift from open procedures to transcatheter procedures. Surgeons need to be totally engaged and proficient at performing TAVR.”

Data from two trials in intermediate-risk patients were presented at the American College of Cardiology Annual Scientific Sessions in Chicago this past April.

PARTNER IIA, a randomized trial comparing TAVR with the SAPIEN XT to SAVR, found equivalent outcomes of death and stroke between the two procedures at 2 years. However, when transfemoral TAVR—which was performed in almost 90% of patients—was considered separately, these outcomes were better for TAVR patients than SAVR patients.

The PARTNER II SAPIEN 3 (S3i) trial compared SAVR data from PARTNER IIA to outcomes from TAVR procedures using a third-generation SAPIEN 3 valve. At 1 year, the researchers found that TAVR was superior to SAVR for mortality and stroke, as well as the combined endpoint of mortality, stroke, and aortic regurgitation greater than moderate.

“In this group of 3,000 intermediate-risk patients, we’re seeing superiority of transfemoral valve replacement to surgical valve therapies,” said STS Director-at-Large Vinod H. Thourani, MD, who was the co-principal investigator (PI) for the S3i trial and chairs the TVT Registry Research and Publications Subcommittee. 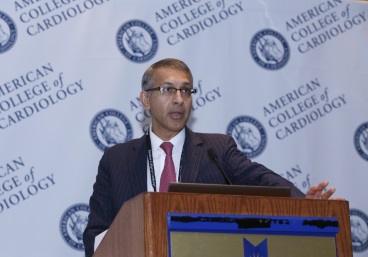 “The improved results may be due to aspects of the SAPIEN 3 third-generation valve. This includes the left ventricular cuff to minimize paravalvular leaks, consistent use of CT scans to assess the valve preoperatively, availability of four valve sizes, and smaller sheath sizes to allow an almost 90% transfemoral access. I believe those are the biggest factors in why we’re seeing such low mortality and paravalvular leak rates,” Dr. Thourani said.

Next year, data are expected to be reported from the SURTAVI trial, which is evaluating all-cause mortality and major stroke at 2 years between SAVR and intermediate-risk TAVR using the CoreValve system, said co-PI Michael J. Reardon, MD.

Now that TAVR has shown positive results in intermediate-risk patients, the next frontier is low-risk patients. Two randomized trials currently are enrolling patients.

One trial (PARTNER III) will evaluate all-cause mortality, stroke, and rehospitalization at 1 year between TAVR using the SAPIEN 3 valve and SAVR in low-risk patients; the second will utilize the CoreValve Evolut R and examine all-cause mortality and disabling stroke at 2 years. Both trials will include a patient substudy using 4D CT scans looking at leaflet motion abnormalities indicative of valve thrombosis in both TAVR and SAVR.

As the landscape shifts, Dr. Reardon emphasized the importance of cardiothoracic surgeons embracing new technology. “Surgeons can ignore what’s going on and be run over by the train, or they can get on board and help drive the train,” he said.

"The results from these low-risk trials likely will change surgical practice forevermore."

As surgeons await the results of the low-risk trials, there is now a tool they can use to help identify which of their high-risk patients may be good candidates for TAVR. The TVT Registry recently released a patient-level risk model predicting the probability of in-hospital mortality after TAVR, which is available as an app in the Apple App Store and Google Play. Search for “TAVR Risk Calculator.”

“The model provides an objective assessment of risk based on the large national experience embodied in the TVT Registry,” said Fred H. Edwards, MD, a former member of the TVT Registry Steering Committee and former Director of the STS Research Center. “Most existing TAVR models are based on patients having undergone procedures other than TAVR. We recognized the compelling need for a large-scale US TAVR population that could be used to develop a reliable TAVR risk model.”

The model was developed from more than 13,000 patients who underwent TAVR from November 2011 to February 2014. “Results from the model will provide valuable objective information that can inform the decision-making process, but should not dictate management decisions,” said Dr. Edwards.

Additional risk models currently are being developed to predict the probability of stroke and mortality at 30 days. In the future, the plan is to develop models that will predict patient benefit as well as patient risk.