STS News, Summer 2019 — Practice arrangements are changing and professional challenges are becoming more intense for many STS members, according to the most recent member needs-assessment survey.

Approximately 800 members (12%) responded to the online survey, conducted in November and December 2018. Questions asked were similar to those from a 2012 member needs assessment and in a 2015 strategic planning survey. 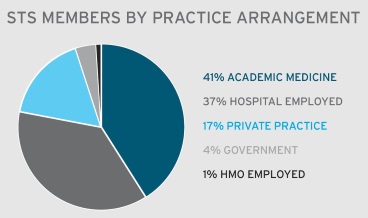 Compared to 2012, a higher percentage of members now work in universities and hospitals (78% versus 66%), although this practice shift was more likely to occur among members within the United States.

Practice changes may be connected to an increasing percentage of members who identified “managing work-related pressures” such as workload and work-life balance as their top professional challenge. In 2018, 38% of members selected this challenge, compared to 33% in 2015. Other high-scoring concerns included staying up to date on clinical advances (29%), career progression (28%), and managing regulatory/administrative burdens (28%).

Differences among the disciplines included adult cardiac surgeons expressing greater uneasiness than colleagues about competition from other specialties and congenital heart surgeons displaying more worry about conducting and applying research.

“The results of this survey are important, and we are grateful to those members who participated,” said STS President Robert S.D. Higgins, MD, MSHA. “As a membership organization, we are developing a series of strategic planning sessions, and members’ concerns will be addressed during those meetings.”

More than three-quarters of members said that they were satisfied or extremely satisfied with their membership (78%), which is similar to the results in 2015 (79%).

The membership benefits valued by the majority were The Annals of Thoracic Surgery (89%), followed by live educational courses such as the STS Annual Meeting (73%), and the STS National Database (61%).

A majority of survey respondents (64%) said that they prefer to receive communications from STS by email. Among the types of information offered by the Society, a plurality chose clinical practice guidelines (38%) and clinical research (23%) as being most important.

The Society’s two general communications, STS News and STS Weekly, have been of increasing value to members. A majority of respondents (81% and 69%, respectively) listed these communications as useful or very useful in 2018, compared to 63% and 50%, respectively, in 2012.

Among targeted communications, those that were perceived by the majority as being useful and very useful were STS National Database News (76%), the Surgical Hot Topics podcast (75%), and the roundtable video series (73%).

Although surveys offer a great opportunity for members to provide feedback to the Society, members should feel free to contact STS at any time during the year. If you have comments or concerns, contact Dr. Higgins via his STS email box.